If Lightning Strikes, Fight Back with Branch Services 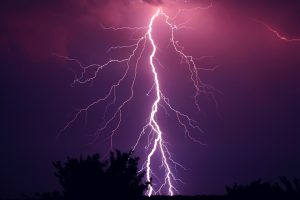 Lightning, while beautiful, can do significant damage to your home.

Lightning can be beautiful to watch, from a distance. There is a long list of problems that can come with lightning, however. First, the loud boom after lightning can scare your pets, making them difficult to find. Be sure to keep an eye on your pets to make sure they aren’t frightened or running. There is also the danger of your home being struck by a lightning bolt. Atmospheric electricity can seriously damage your home; it could also cause a fire as a result of the surge of electricity. To help you prevent a lightning fire on Long Island, Branch Services wants to give you some quick advice on the dangers of lightning strikes and how to prevent lightning strikes in the future.

What Happens When a Lightning Bolt Strikes a House?

How Can You Prevent a House Fire?

One of the most complete ways to prevent a lightning fire is to invest in a protection system to be installed by a professional. Electrical rods can direct the surge of power to the ground and away from your property. You should also be sure to unplug all electrical devices to avoid having surges damage your gadgets and gizmos.

Lightning striking your home can be dangerous. There are precautions that can be taken to minimize, or even remove, the chance of significant storm damage. Remember to turn off your water if the storm is to be significant and unplug your TVs and computers! Branch Services is here to help if you have suffered lightning damage or would like an assessment to see how prepared you are for a storm. Give us a call today at 631.467.6600